Finding strength in our moves.

New York, New York – We are pleased to announce that the 3rd FIDE World Junior Chess Championship for the Disabled will be held in the Cherry Hill, New Jersey, USA from July 9-15, 2019.

In the previous two World Junior Chess Championships, young players with disabilities demonstrated a strong will to improve and master the game of chess through their participation in this high level competition.

The organizer and team is dedicated to ensuring that each player achieves his or her greatest experience in this event. The event includes a professional ‘Chess Masters Training Program’ that is directed by Grandmaster Thomas Luther, Chairperson of the FIDE Chess for Disabled (DIS) Commission. This ’masters program’ provides essential training and support that aims to encourage and motivate players with disabilities to participate in other events, such as the FIDE World Junior U20 Chess Championship.

The 2019 event regulations and online registration can be found on the official website: www.WorldJuniorChess.org. Registration for the event includes participation in the ‘Chess Masters Training Program’ which is provided at no extra cost to the participants.

A special thank you to the major sponsors of this event.

We are looking forward to welcoming you in Cherry Hill! 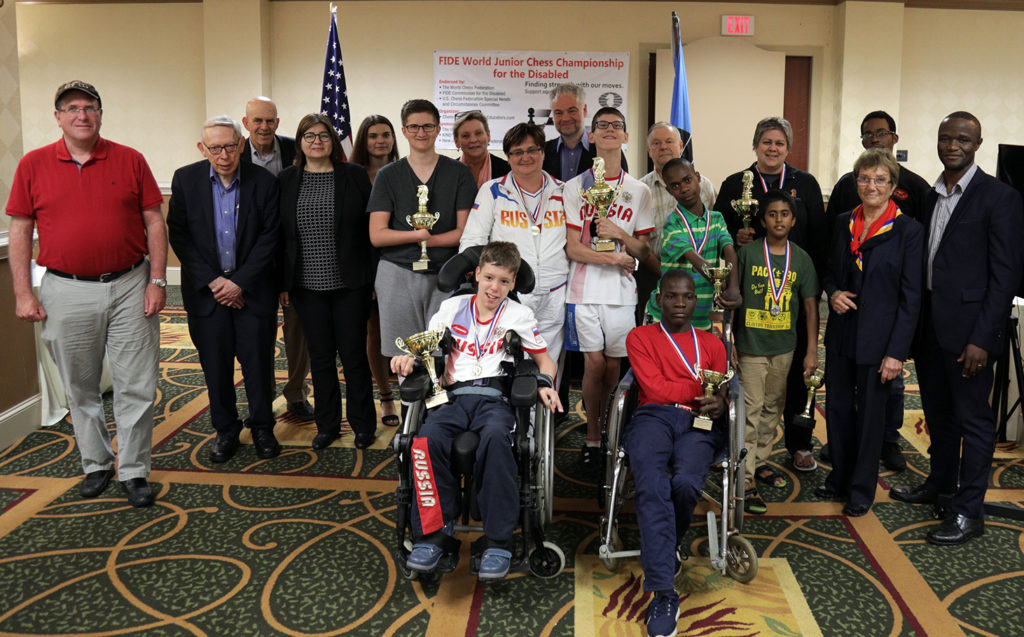 Dr. Leroy Dubeck awarded the 1st Place Cup to Ilia Lipilin on behalf of The U.S. Chess Trust, the major sponsor of this event. 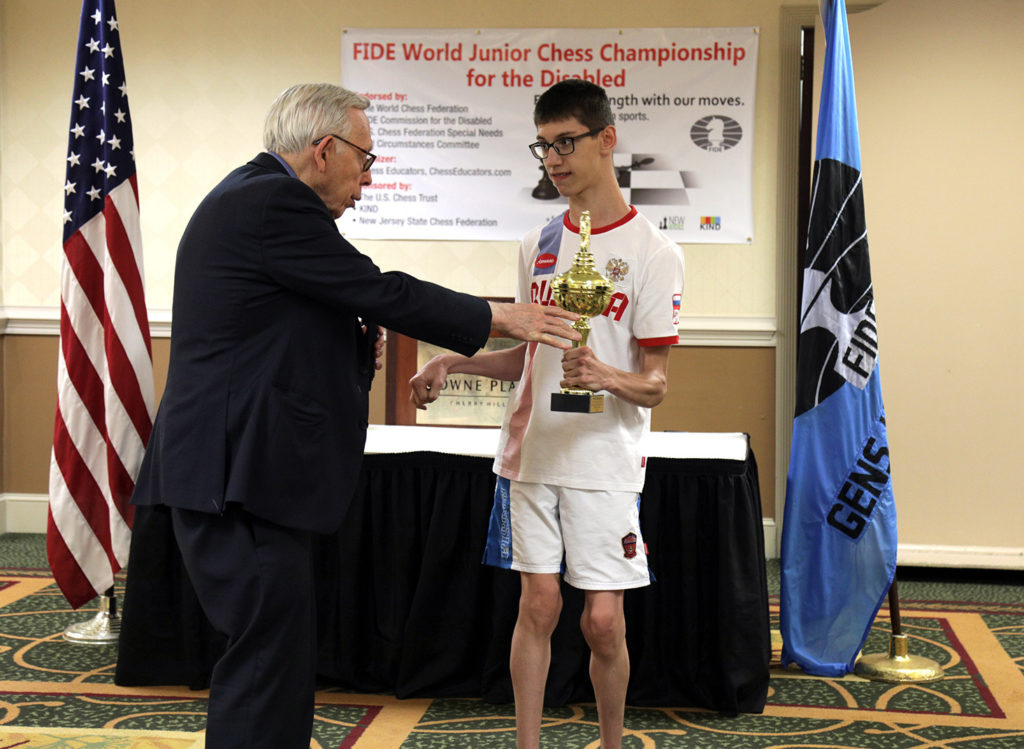 Maksim Petrov (Russia) took 2nd Place helping secure the Gold Medal for Team Russia. The official team coach for Russia, Svetlana Gerasimova, accepted the prize for the team with a heartfelt speech and special thanks to the Chief Organizer, Beatriz Marinello and Chairman of the FIDE Commission for the Disabled, GM Thomas Luther. 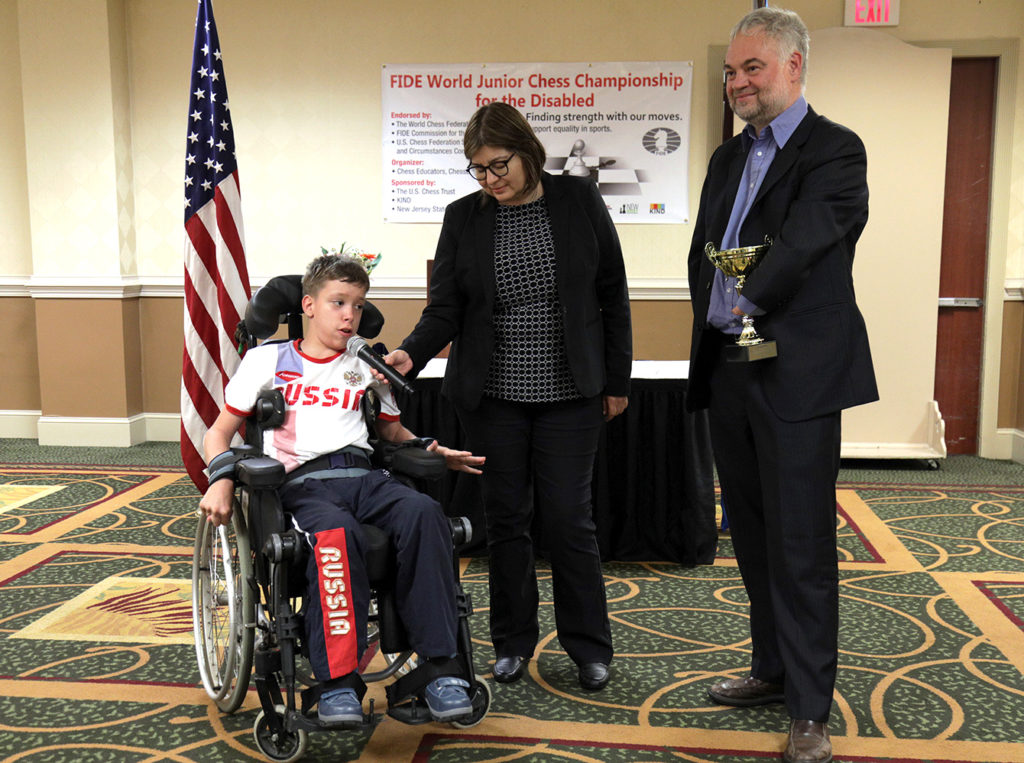 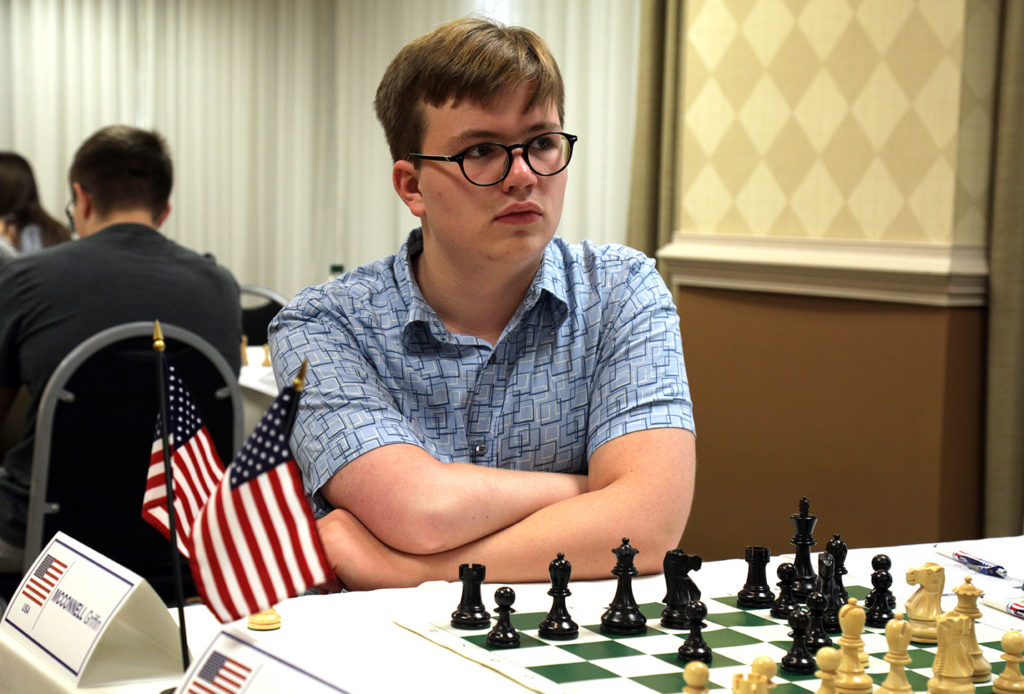 Griffin McConnell (USA) earned 3rd Place in the event. Griffin is a top player in the United States; he helped secure the Team Silver Medals for USA.

“When the FIDE World Junior Chess Championship for the Disabled was created, no one was willing to organize the event and it sat there for a long time.” – GM Thomas Luther. That is, until IO Beatriz Marinello stepped up to the plate to take on the challenge. If anyone knows Beatriz – they know that it is just like her to break ground, to clear a path where there is none – and a path for players with disabilities was one she strongly believes in. 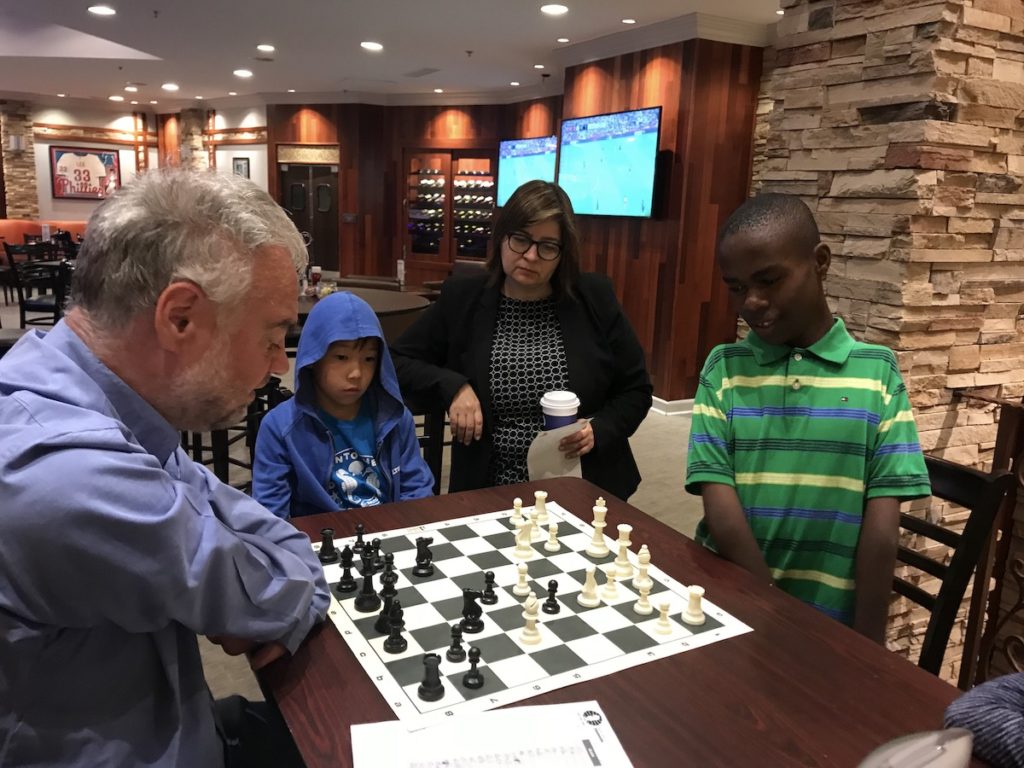 Chairperson, FIDE Commission for the Disabled, GM Thomas Luther goes on to say, “It was my feeling that this event would help lots of young players with disabilities. We want to bring chess to multi-sport events, such as the Olympics, Paralympics etc. Due to the good work of many people and FIDE, chess is already included in the Deaflympics and the Asian Para Games – two big international multi-sport events where chess is part of the games. We hope the FIDE World Junior Chess Championship for the Disabled will work as a bridge to other events with additional opportunities given to players.” 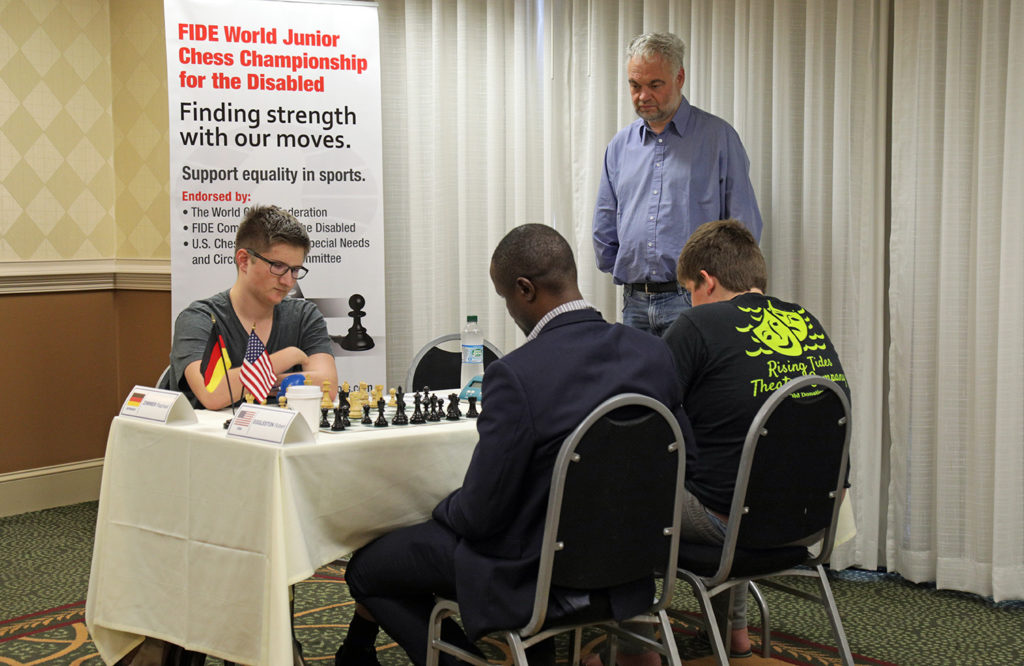 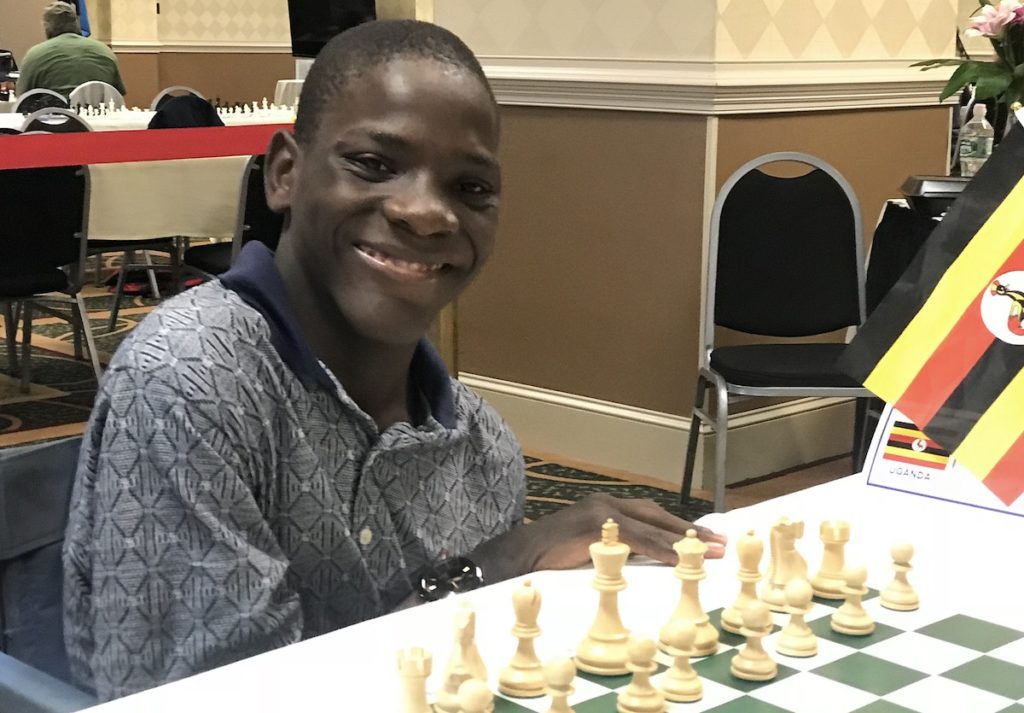 “Players with disabilities face challenges in chess tournaments; this in turn may present a unique set of circumstances for organizers to take on. I know about this from the view of a player and an organizer. Right now, in the FIDE World Junior Chess Championship for the Disabled a player with autism participated. The special care from the arbiters and organizers made his participation a success story. We, at FIDE, are on a good way to improve on existing regulations. This is an ongoing process. Only a short time ago, FIDE regulations and guidelines were added to the FIDE handbook.” GM Thomas Luther 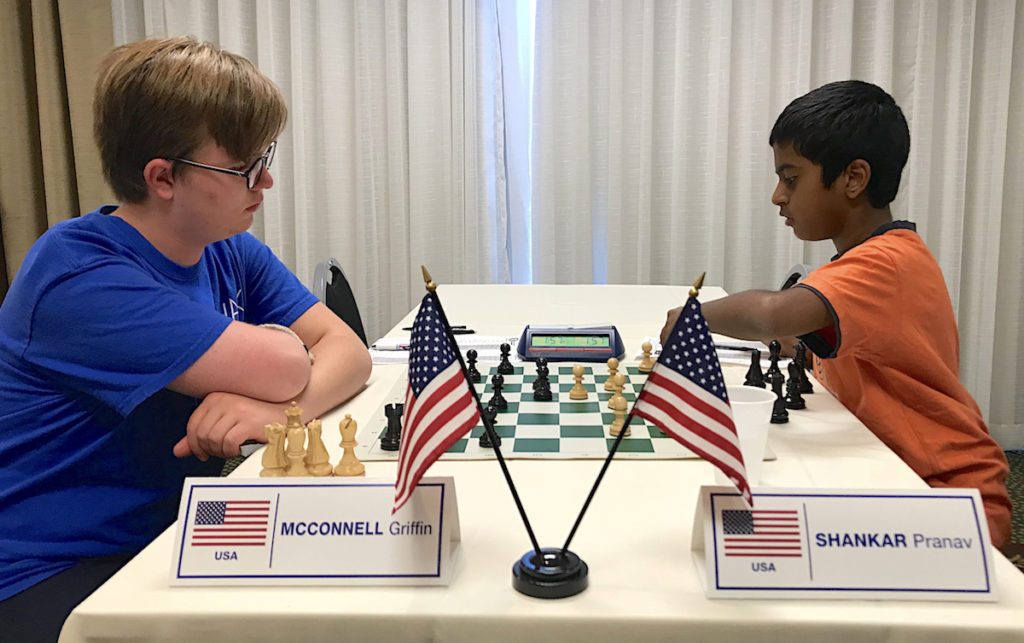 Pranav Shankar (USA) has autism and is a young player who is dedicated to chess and has a strong desire to continue training, competing and improving. In this tournament Pranav felt comfortable enough to share an experience he had at another tournament.

We have to encourage players with disabilities to speak out about such challenges because it is with real world experience that we can make the most difference. This kind of feedback is far more valuable and helpful than hypothetical discussions in a board room because it comes directly from the affected players.

“I was on the verge of being forfeited because I was not being quiet.” He goes on to say, that after his opponent complained to the director, he was separated from the other players. Pranav soon had difficulties because he didn’t know when he could speak without fear of being forfeited. Despite the challenges, Pranav was happy to report that he still went on to win his game and elaborated with a lively game discussion and comments about the FIDE World Junior Chess Championship for the Disabled. 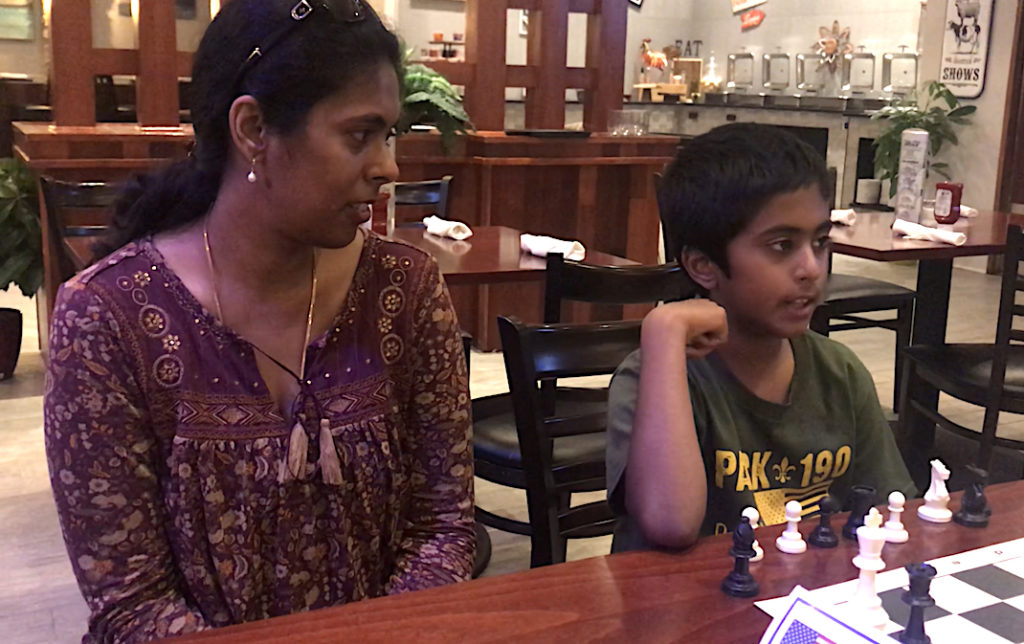 “Ideally, I would like Pranav to sit at the same table with the other players. Going to other tournaments I get nervous because at every tournament there is always somebody that has complained. We are kind of at the mercy of the tournament directors. If the tournament director is good, he tries to accommodate us. Otherwise, sometimes he has to forfeit. In this event, I feel supported and understood.” – Mrs. Shankar

The goal is not to create an event that will have players with disabilities participate in this event only, quite the opposite. Tournaments like this give players the opportunity to play once a year and be part of a community in which they feel comfortable enough to share their experiences.

Why do we need a chess tournament for people with disabilities?

“We have chess tournaments divided by rating, nationality, age, gender etc. So why not for players with disabilities? Here we have nice playing conditions that help players deal with the complexities of competition. We only have one of these events per year all over the world – leaving players with plenty of time to participate in all other events. In addition, this event helps us provide valuable feedback to improve current FIDE regulations as they may apply to all other chess events. In this way we aim to protect the player, not only in this tournament, but in all of the other events they may wish to participate in.” GM Thomas Luther

As this event wrapped up, IO Beatriz Marinello and Chairperson of the FIDE Disabled Commission, GM Thomas Luther were already discussing and planning for next year’s event.

A very special thanks to our main sponsor, The U.S. Chess Trust, for their support and generosity. We would also like to thank the New Jersey Chess Federation and KIND for their generous contribution and continued support.

“Organizing this event takes a lot of hard work, perseverance, vision and creativity. The main focus must be the players. We have already secured the venue for next year; it will be held at the Crowne Plaza Hotel in Cherry Hill, New Jersey once again. We look forward to seeing the players and hope that each country will bring a bigger team. Players and coaches – get ready!” IO WIM Beatriz Marinello

Learn more about the event and players at the official website: www.WorldJuniorChess.org

On August 7th, the Opening Ceremony and the Drawing of Lots kicked off the 2nd FIDE World Junior Chess Championship for the Disabled in Cherry Hill, New Jersey with commentary and greetings from IO Beatriz Marinello, Chief Arbiter Carol Jarecki and FIDE Commission for the Disabled (DIS) Chairman GM Thomas Luther.

The US Chess Trust’s Dr. Leroy Dubeck made a surprise appearance, easily impressing and charming our young players and parents. Dr. Leroy Dubeck was the President of the US Chess Federation when Bobby Fischer was the World Champion and is the Treasurer of the US Chess Trust, the main sponsor of this prestigious and very special event. The organizing committee is especially thankful for their contribution and support. 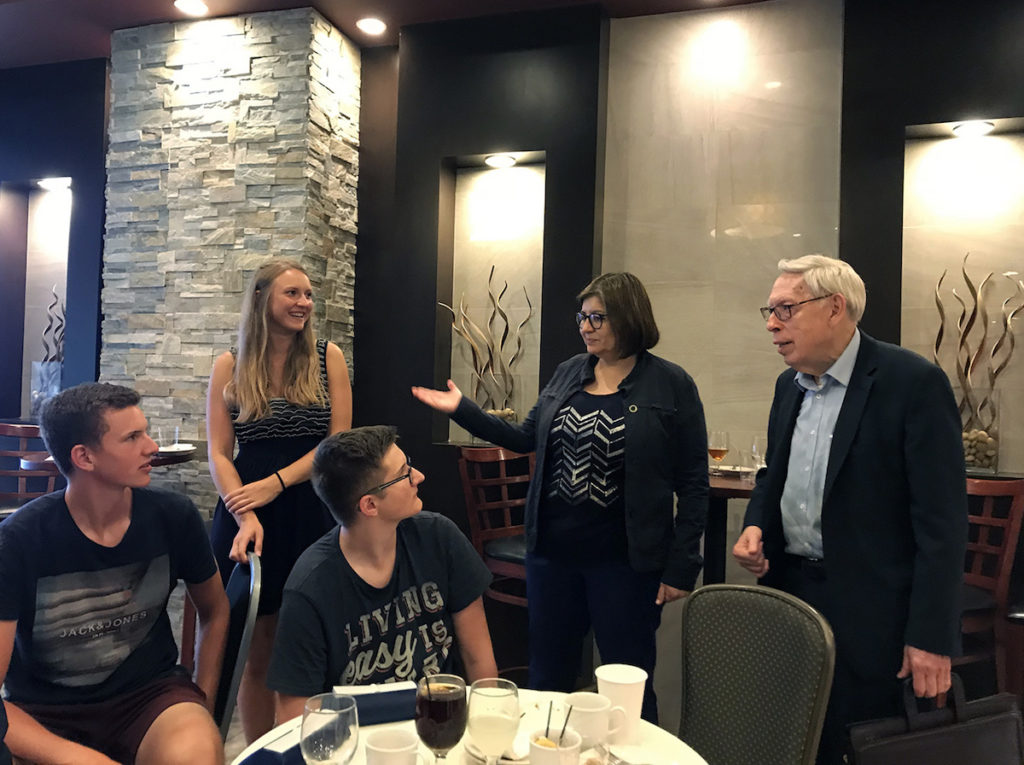 Players from the USA, Germany, Russia and Uganda arrived in Cherry Hill, New Jersey for the opportunity to compete in this World Junior Event.

We have two new USA Players this year, Pranav Shankar and Robert Eggleston who traveled from out of state to participate in the event. Another new face in the tournament is John Denis Mwesigye who joins Wasswa Sharif Mbaziira of Uganda as his teammate with accompanying coach Robert Katende of the Disney movie, “The Queen of Katwe”.

The Head of Delegation for the Russian Team, Mr. Zbigniew Antoni Pilimon and their official coach Svetlana Gerasimova, accompany players Ilia Lipilin and Maksim Petrov and their mothers. 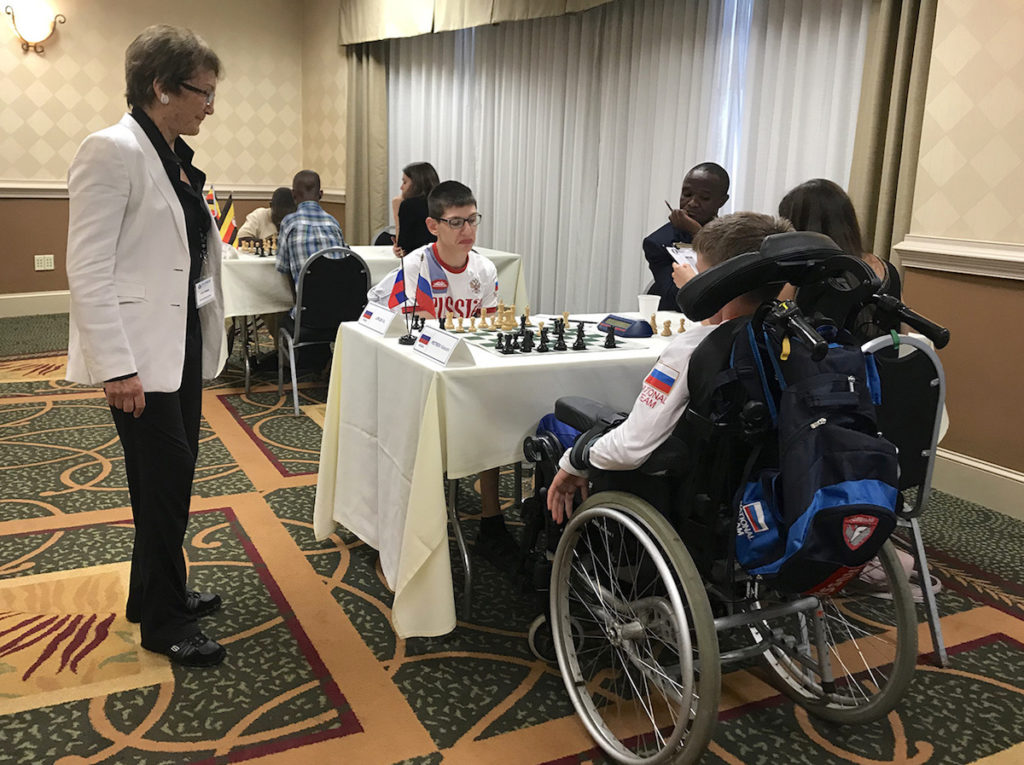 It was heartwarming reunion for returning World Champion, FM Raphael Zimmer (Germany) and Griffin McConnell (USA) who bonded quickly at last years event. This event is not just an opportunity for players to participate in a World Junior event, but, an opportunity to make friends with other players who may face similar challenges in tournament play. 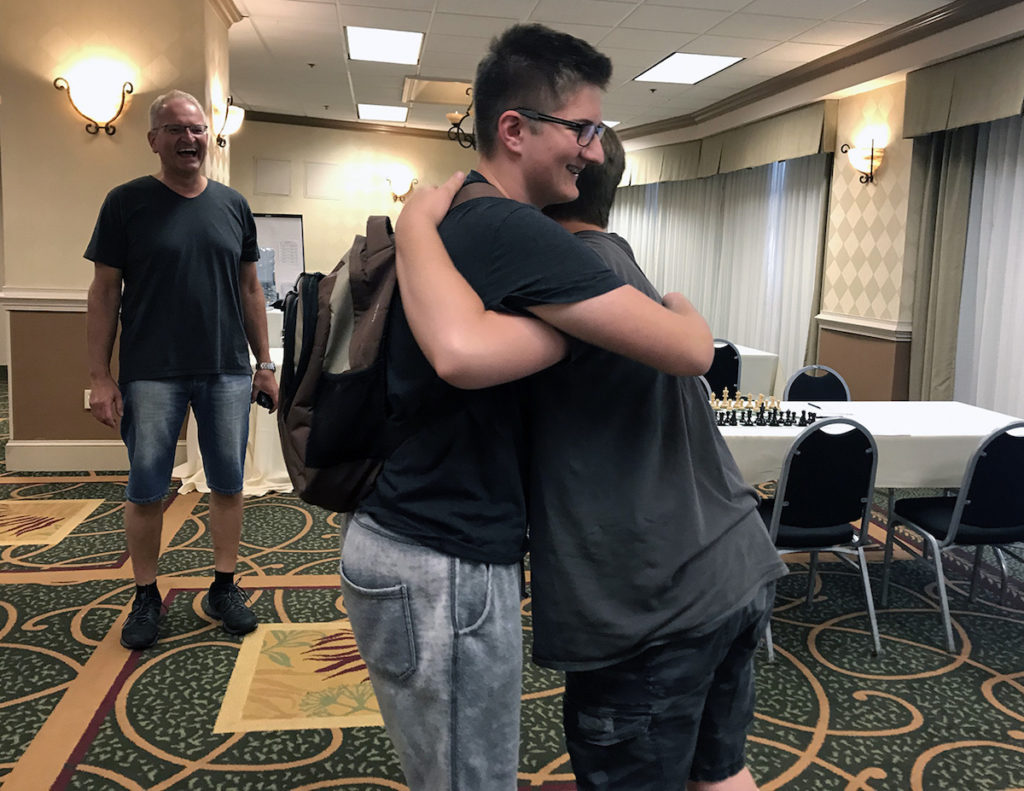 This year we have three qualifying teams. Team USA, Team Russia and Team Uganda – each country must have a minimum of two players to qualify as a team, with the highest two scores per team counting towards team points.

The Players Technical Meeting followed the Opening Ceremony, which was open for discussion with coaches and players from all of the participating countries. 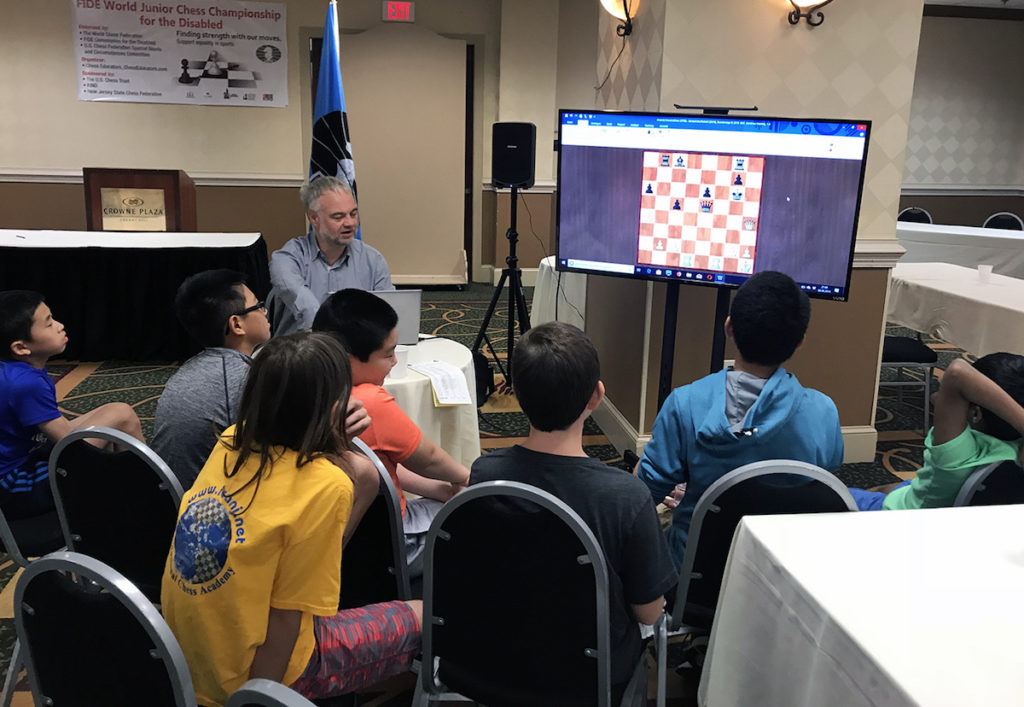 On August 8th, the players participated in a simul with GM Sandro Pozo, which also featured game analysis with GM Thomas Luther and GM Aryam Abreu. The players also participated in the Chess Masters Training Program – rounding off their participation in the event with an educational component that is an important factor in a chess players training.
Round 1 took place on August 8th at 4pm.

THE 4th WORLD JUNIOR CHESS CHAMPIONSHIP FOR PLAYERS WITH DISABILITIES

HOW CAN YOU HELP?

- Sponsor a Player
- Donate to the U.S. Chess Trust
- Volunteer
- Support a player!

© 2020 All Rights Reserved. All images and content are copyright protected.